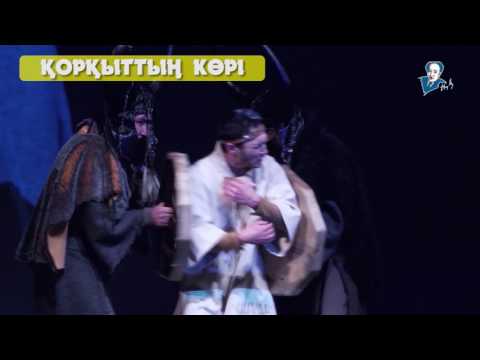 Korkyt is the most renowned person among the founders of the Eastern civilization.

Korkyt  is the source of throughout Asian culture.

Korkyt is a legend of Alash art.

Korkyt is father of kazakh kuyi .

Korkyt is the sacred and the spiritual concept...

..."Curse of Korkyt"  is a performance specially dedicated to the legendary life of our ancestor -  Korkyt.

"Curse of Korkyt"  is  Requiem of civilization, culture, art, kuyi and the sacred and spiritual concepts.

"Curse of Korkyt"  is life of the universe - fusion of the religions...

Korkyt - prominent historical figure of his time, was not a knight (batyr), not a warrior, he was a brilliant representative of the era of the collapse of Turkish society into separate ulus, a thinker who foresaw the future. His melodies, kuyi, that he had left to  people sounds till now and instill a sense of patriotism.

"Korkyt was the first who learned to play the kobyz, was the first shaman (witch-doctor). The legend about Korkyt is deeply optimistic, the  meaning of this legend is that Korkyt  found immortality in the service to humanity founded by his art."

Composer: Algirdas Martinaitis,  laureate of the national prize of Lithuania

Unfortunately up cooming spectacles not found